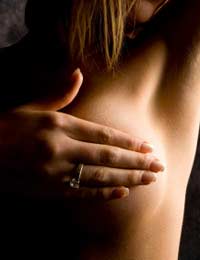 When a woman has a breast or breasts removed in order to fight breast cancer she faces the decision of whether or not to reconstruct the area following her mastectomy. Some women choose not to reconstruct the breasts at all while others want to reconstruct them so that they look exactly as their natural breasts looked, and still others decide to reconstruct their breasts to look as they had always hoped or imagined their own breasts could have looked. Whatever a woman decides, breast reconstruction is an intensely personal decision and must be made with her own health and well-being in mind.

If women are having a mastectomy on one or both breasts then there may be the option of having their breast(s) reconstructed at the same time so that they do not need to have another surgery. This means that after the breast tissues are removed, the breast pocket (remaining breast skin) is filled either with implants, the woman's own tissue from another part of her body, or a combination of both. When a woman's own tissue is used the surgery is much more complex and often referred to as a flap procedure. This tissue is usually taken from the abdomen, back or buttock. Implants such as those used in any breast enlargement may also be used. The size of the implant inserted will depend upon the size of the breast pocket. Sometimes an empty implant may be inserted that can then be inflated with saline at weekly intervals to help the breast skin grow by intervals. When the size of the implant is right, it may be left in as it is or it may be removed and a permanent implant inserted instead. Implants can also be inserted after the mastectomy is carried out at an entirely different time.

Reasons For or Against Breast Reconstruction

There are many reasons that a woman might decide for or against breast reconstruction:

Breast reconstructions are not medical necessities, but many women prefer to have them following the removal of their own breast(s). The decision of whether or not to reconstruct the breasts following a mastectomy is an intensely personal decision, and one that women will want to discuss with their doctors and nurses to help decide what is right for them.